Another assignment for Investment News, provided me with the opportunity to come up with the following image:

Filing for the storm

The article, written following the storm that has just hit NY, is dealing with the preparation for an eventual disaster amongst adviser whom themselves, happen not to have a succession plan in palace..

Last week, in his column  Shlomo Artzi wrote about the nature of the spoken word. The role it plays in our lives end the wide array of consequences it may evoke. I took it as an invitation for a literal representation of the birth of the spoken word. 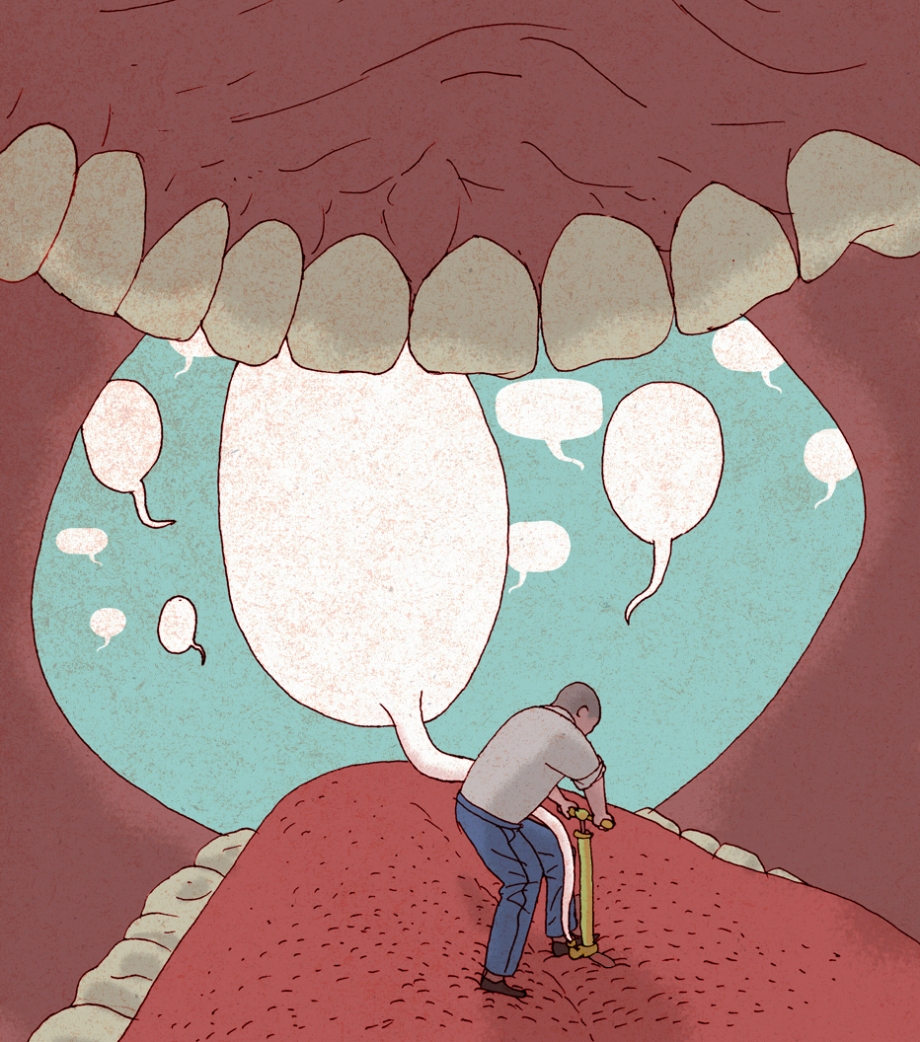 The birth of the spoken word

The small illustration refers to a lovely paragraph in the text, referring to the conversation between adam and eve, after they’ve tasted from the forbidden fruit. 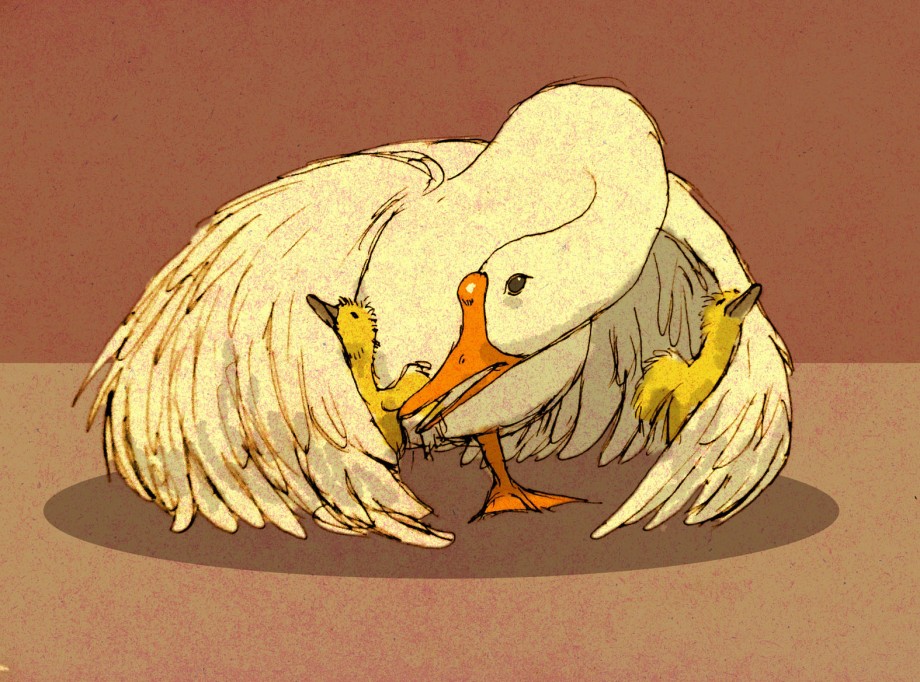 A dome of feathers

The war in between Gazza and Israel occupied our minds and  hearts throughout these last eight days of war.

My friend Kinneret Rosenblum, who happens to be a brilliant and successful author. Invited me to contribute  an image that would correspond with her moving and perturbing personal account of her state of being in Tel Aviv under the constant threat and eventual missiles attacks.

So here it is, translated from the  hebrew original, published on Kinneret’s blog parisait.com:

Seven Boom / not leaving the Tel Aviv (for the time being)

One set of clothes per person, pajamas one, but warm ones, decent, ones that one can run in if necessary.

All of our shoes are waiting in line at the door.

Laptop, yes or no?

No. So back up. What we do with the hard disk, though? Just leave it here?

Reminds, more than everything, sitting in an unlocked toilet

With hand presses the door from the inside

He who lives in a house surrounded by windows and trees, better not pick up a fight with those who throw stones or missiles.

Nor with the fruit bats, that started recently fouling the our windows.

Paracetamol. You can never know.

Need to remember where the car is parked. There’s fuel.

Sirens going up and down. It sounds like a joke. Distant, cynical.

No safe rooms or shelters in buildings that were built almost a century ago.

Recall quickly and go out to the staircase.

Recalling a bit more, and going down another floor. Meeting the neighbors. I’m in my pajamas, and I am so embarrassed I wish I’d die. Hearing a missile fall. I wish to live. Mainly I wish  to know where is my daughter, that is on her way back from her choir rehearsal, only the mother in charge of the ride this week stopped along the way to pick up her elder daughter from a friend. Big Mistake.

Runnig upstairs, home, to get the mobile, keys, wallet, turn off the gas under the Bolognese sauce. Tempted to change, settles to put on shoes, the first pair I find, not suitable at all to the striped pajamas, not suitable at all for running. Running back to the staircase, the second floor. No reception anywhere.

Recalling: Whatsup. They, three girls and the mom in charge of carpool today, were caught in the northern part of the city during the siren; regaining reception. Dad is calming a distant girl on the phone, I try to reinforce the carpool mother. I Trust you, baby, drive carefully. Traffic jams on Namir Road, Traffic jams on Ibn Gabirol.

A girl running home in tears.

As I was writing about yesterday’s fall, another siren went off. Strong fall.

Be dismantled immediately all the air conditioners that  kicks in by a thin screech, motorcycles roaring in the streets, cats mewing in a high tone to their females, everything that makes you – you who have just persuaded the crying girl that everything will be right, you who have even enjoyed the unexpected neighbors assembly on the staircase of the second floor, you who have gone back to yesterday dish that you have neglected once your appetite vanished – to sharply turn your head backwards, in order to understand at a glance whether he hears what you hear, interpret, and understand that everything is okay. For now.

Yesterday, for the first time, I panicked like never before. I do not panic easily. Scared, yeah, of little things of life: a cockroach, a rat, when a girl falls and bloodily scratches her knee, strong thunder that seem like they aim to split the universe, when someone sneaks up behind me when I’m reading. But due to my pathological optimism, I’m not scared thoroughly.

So yesterday, when we returned from the second floor, and the fit of crying and hyper-ventilation, first one in my life, by the way, you’d think it was a panic; While they have already thrown Scuds at me, and Katyushas and I even some mortar fire (forgive me if I have my ballistics messed up); but after all, this is my first missile attack as a mother. But no, it was not a panic. I did not fear for our lives. Perhaps my optimism is stupid, but I do not think we’ll die of a Pajer.

It was grief. Deep grief for this is our life. For that is the best world best that we have managed to arrange for our daughters. Five minutes after the first missile, that is what I have come to realize. Maybe we’ll go now to a friend’s place with a shelter, or up north, or any region in Israel that is currently out of line of fire. I packed a bag, I prepared some choices. Maybe, if things get serious, maybe we will even go to Paris. But we will always return. This can always return.

Now, the second, on Friday afternoon, youngest had not cried so much, and it was nice to meet all the neighbors again, and other than the pounding of the heart and the tension in the skin, it seemed five minutes after, and everything returns to normal. In a glance we have agreed with each other, that that, a  second missile in 12 hours, still does not change our plans. We are not leaving Tel Aviv. That the second missile is actually much less worse than the first one. And if there’s another one –

And that, for me, is much worse. Getting used to that is million times worse than panicking by that.

The looming election is an inevitable burning material for Artzi’s weekly column. Amongst other qualities mentioned, he writes about his yearning for a leader who would govern and be governed by his heart.

Leading from the heart

The spot illustration relates to an iconic figure, in one of Artzi’s iconic song the: Political beats.

I simply couldn’t resist the visualisation of this one, following the representation of the chief of the hearts.

Home Buyers Do the Mortgage Time Warp, is the title of yet another assignment from the WSJ real estate section.

I really enjoy the challenge of treading in this minefield of abstract financial terms, trying to give a visual representation to intangible concepts.

Here are this week’s illustrations for Artzi.

the state of the nation’s builders