Well, some independence… Yair Lapid and Raanan Shaked shared a written exchange between them around their sentiments with this years day of independence in a special supplement of  Yedioth.

I must say, throughout the last two years I can sum up my own feeling about the state of Israel as grim and quit desperate. Raanan started off with a very harsh, kicking and bitter description of the israeli reality, without mincing his word nor with any pity on any the main protagonists in the current sorry state of affair of  Israel .

Yair replied with wit and balance, raising the argument of the inevitability of the future existance of the state of Israel, maintained by the impossible coalition  of sane people who still form the majority. He then invited Raanan to pick the glove and join him in his endeavor of helping the sane, no matter their provenance.

I have picked this metaphor and projected it on my illustration.

I have accompanied the main illustration with a variety of gloves, each, attached as a letterhead to each text.

This one was for  Calcalist. The article brought the testimonies of five women who shared separately, the experience of encountering the unpleasant banging in the head of the transparent, yet, very real glassceiling.

Möbius band and the glass ceiling

Just before publishing, the illustration was chosen to figure on the cover, so, as an emergency measure, I had to come up with an additional full-page illustration. I shall not be revealing the time it took for execution… 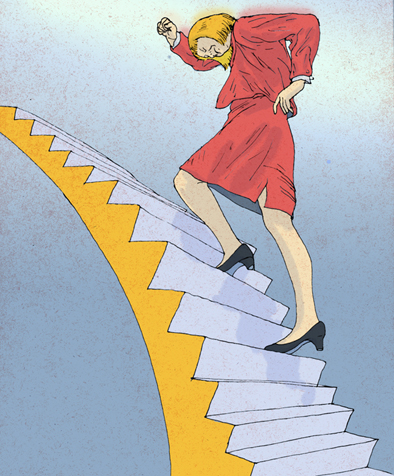